Listen all week for your chance to win a grand prize package to see Keith Urban in Las Vegas! 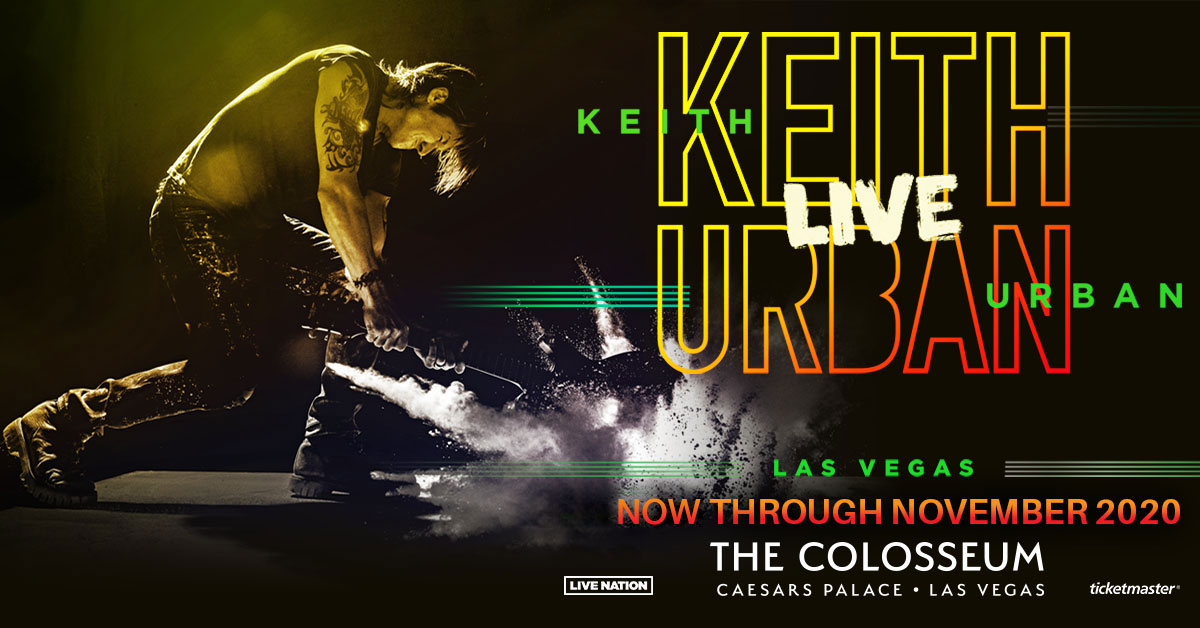 Keith Urban will bring Keith Urban Live – Las Vegas to The Colosseum at Caesars Palace for 12 unprecedented concerts to premiere in January 2020. After two sold-out performances at the award-winning and newly renovated venue in September 2019, Urban will now return with an all-new show, packed with hit songs, explosive showmanship and usual unpredictability. The shows will be a once-in-a-lifetime concert event – an arena-sized production in a theater setting, up close and personal. Keith Urban Live – Las Vegas will utilize The Colosseum’s new general admission capability on the main floor for a dynamic and reimagined fan experience for the landmark venue. The shows are scheduled to begin at 8 p.m.

Ticket information:
General ticket prices beginning at $69, plus applicable tax and fees, go on sale to the general public at ticketmaster.com/keithurbanvegas or in-person at The Colosseum at Caesars Palace box office.

Rules
Must be 21 years of age or older. Prize may be used only for the date(s) specified. Hotel guest room accommodations for winner and guest, double occupancy, two days and one night based on availability. Not redeemable for cash, not transferable, may not be combined with another offer. Winner must use all prize components in a single visit. Winner may not substitute prize components. In the unlikely event that one or more of the prize components is not available for any reason, Caesars Palace reserves the right to substitute a Las Vegas experience of equal or greater value at its sole discretion. In the unlikely event that the artist does not perform during the scheduled trip, for any reason, Caesars Palace may substitute a Las Vegas resort experience of equal or greater value at its sole discretion. Caesars Palace is not responsible for transportation. Gratuities are not included. Hotel guest must present a major credit card at check-in to guarantee hotel charges not included in this prize.

Contest Rules
How to enter: Listen to Go Country 105 from Monday February 10, 2020 at 7:00am PST through Friday January 10, 2020 at 7:00pm PST. Listeners will have a chance to call in at the designated time to qualify for a daily grand prize which includes two (2) tickets to see a TBD Keith Urban concert at Caesar's Palace in Las Vegas in 2020 along with one (1) night hotel accommodations for the night of the concert. All qualifying winners will receive Keith Urban's Graffiti CD or digital download. Grand prize winner will be randomly selected at the end of the contest.

Description of prize: Twenty-five (25) qualified winners to be selected to win Keith Urban's Graffiti CD or digital download. Value: $15. One daily (1) grand prize winner to be randomly selected from that day's qualified contest winners to win a total of two (2) tickets to see Keith Urban for a TBD show at Caesar's Palace in Las Vegas in 2020 along with one (1) night hotel accommodations for the night of the show and a $100 travel card. For example, qualified winners on Monday February 10, 2020 will be randomly selected to win that day's grand prize. Total of five (5) grand prize winners over the week or one (1) each day beginning Monday February 10, 2020 through Friday February 14, 2020. Date of Keith Urban show to be determined by Go Country 105 unless otherwise noted. Value: $650.

Go Country 105 is not responsible for any other expenses, including ground transportation, meals, taxes, fees, etc. Go Country 105 reserves the right to change the dates of this contest and or dates of the trip, or provide a substitute grand prize equal in value. Prize is non-transferable and must be used on the exact dates specified above unless changed by Go Country 105. Trip is for two (2) people: one (1) winner and one (1) guest. NO EXCEPTIONS. Once distributed, misplaced, lost or stolen tickets to any scheduled event cannot be replaced. During the course of the trip, if any event is canceled or postponed be by act of God or the result of war, riot, sovereign conduct, or the act or conduct of any person or entity not party to the trip, then Go Country 105 shall be excused from any and all obligations pertaining to the canceled or postponed trip event. This trip is rated G for General Audiences. Disorderly behavior and/or illegal conduct may result in revocation of the prize.

Each Trip Participant must individually execute a release & waiver forms, releasing Go Country 105 and its owners, employees, trip personnel, representatives, agents, directors, officers, successors and/or assigns from any and all claims or liability including but not limited to such liability arising from any acts or omissions resulting in injury to body or property of contest winners while they are participating in the trip including while in transit to and from Las Vegas. Each trip participant must also sign a W-9 form and return to Go Country 105.

Additional qualifications: Listener cannot have won a previous Mt. Wilson FM Broadcasters, Inc. contest in the previous sixty (60) calendar days from the day of entry. Winner and winner's guest must be 21 years or older. Winner must confirm acceptance either by phone or e-mail of the prize and provide full names, date of birth, and address to Go Country 105 within seven (7) business days of being contacted by Go Country 105. In the event that information is not provided or in the event that the prize is not confirmed within the allotted time, the winner's prize will be voided and no substitute prize will be awarded. Go Country 105 reserves the right to cancel this promotion at any time. Go Country 105 reserves the right to substitute a prize of equal value.