Garth will be hitting dive bars across the country, And Go Country 105 wants to send YOU on the road to spend and evening in the deep end of a dive bar with Garth! 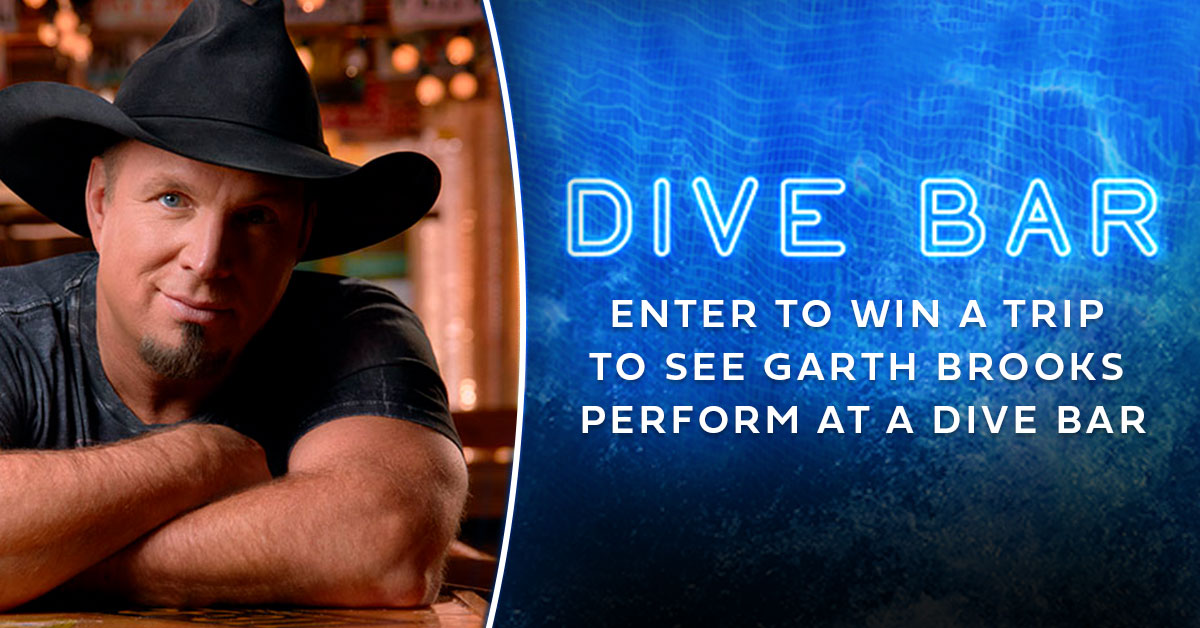 Garth will be hitting dive bars across the country, And Go Country 105 wants to send YOU on the road to spend and evening in the deep end of a dive bar with Garth! So keep listening to Go Country 105 all this week.

YOU CAN ALSO ENTER TO WIN A TRIP TO SEE GARTH BROOKS AT A DIVE BAR AT:
www.garthdivebarsweeps.com

Contest Rules
How to enter: Listen to Go Country 105 beginning Monday August 26, 2019 beginning at 8:00am PST through Sunday September 1, 2019 at 5:59pm PST. Listeners will have a chance to call in at the designated time to win a grand prize trip for two (2) people to see Garth Brooks perform at a TBD "Dive Bar" in a TBD city over TBD dates. Grand prize includes two (2) tickets to the Garth Brooks Dive Bar show in a surprise city, two (2) night hotel accommodations in the surprise city, roundtrip airfare for two (2) to the surprise city, and ground transportation to and from the airport in the surprise city. All qualifying winners will receive one (1) Garth Brooks Dive Bar t-shirt in either Large or X Large. One (1) grand prize winner will be randomly selected from all qualified winners at the end of the contest to win the trip.

Go Country 105 is not responsible for any other expenses, including ground transportation, meals, taxes, fees, etc. Go Country 105 reserves the right to change the dates of this contest and or dates of the trip, or provide a substitute grand prize equal in value. Prize is non-transferable and must be used on the exact dates once the surprise city and dates are announced by Garth Brooks unless changed by Go Country 105. Trip is for two (2) people: one (1) winner and one (1) guest. NO EXCEPTIONS. Once distributed, misplaced, lost or stolen tickets to any scheduled event cannot be replaced. During the course of the trip, if any event is canceled or postponed be by act of God or the result of war, riot, sovereign conduct, or the act or conduct of any person or entity not party to the trip, then Go Country 105 shall be excused from any and all obligations pertaining to the canceled or postponed trip event. This trip is rated G for General Audiences. Disorderly behavior and/or illegal conduct may result in revocation of trip winner and their guests' accommodations, and participation in scheduled trip events.

Prize may be used only for the date(s) specified once the surprise show and dates are announced by Garth Brooks. Hotel guest room accommodations for winner and guest, double occupancy. Not redeemable for cash, not transferable, may not be combined with another offer. Winner must use all prize components in a single visit. Winner may not substitute prize components. Hotel guest must present a major credit card at check-in to guarantee hotel charges not included in this prize.

Each Trip Participant must individually execute a release & waiver forms, releasing Go Country 105 and its owners, employees, trip personnel, representatives, agents, directors, officers, successors and/or assigns from any and all claims or liability including but not limited to such liability arising from any acts or omissions resulting in injury to body or property of contest winners while they are participating in the trip including while in transit to and from the city. Each trip participant must also sign a W-9 form and return to Go Country 105.