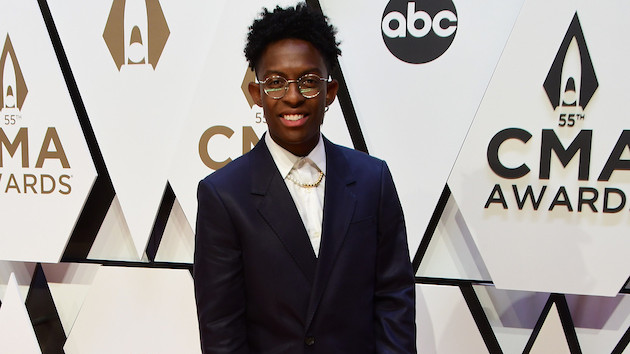 Breland shows off his slow jam chops with "Told You I Could Drink," a new collaboration with country trio Lady A.

Attended by the group's signature vocal harmonies, Breland captures the sting of a breakup in his heartache ballad, with lyrics that recount memories of turning to the bottle, first to toast a new relationship and then to mourn its loss.

"I told you I could drink / Told you I'd be fine / Told you I would move on if you left me behind," Breland sings in the chorus. "Cause you pushed me to the brink / And I ain't got no time / To sit around and wait for you to make up your mind ..."

"Told You I Could Drink" brings out some R&B elements -- a relatively new turn for Breland, but one that's consistent with his commitment to genre-bending country music.

Fans already got to know his rafter-raising vocal runs and sing-a-long country chops on "Beers on Me," a collaboration with Dierks Bentley and Hardy, which was the up-and-comer's first #1 at country radio.

He also showed off his gospel leanings on "Praise the Lord," a duet with Thomas Rhett, and pop stylings with "Cross Country," released both as a solo version and as a duet with Mickey Guyton. Through it all, Breland is establishing himself as a lyrical master with a fresh spin on country songwriting. He'll paint a more complete picture of his artistic identity with the release of his full-length debut, Cross Country, due out in early September.