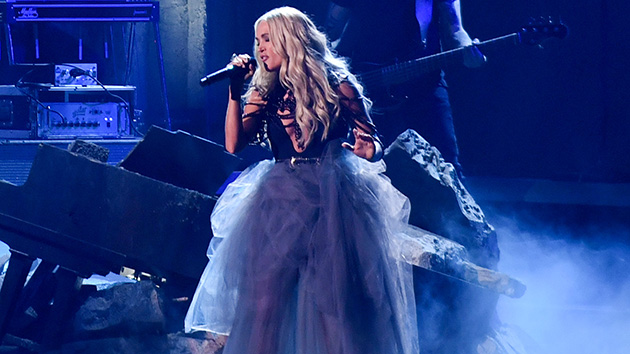 Dreams do come true, and Carrie Underwood is living proof, as she performed with Guns N' Roses for the second time.

While over in London, the country superstar made a surprise appearance during the legendary rock band's performance at Tottenham Hotspur Stadium. She rocked out to "Sweet Child 'O Mine" and "Paradise City," trading vocals with frontman Axl Rose, while Slash slayed on guitar.

In April, Axl Rose joined Carrie on stage during her headlining set at Stagecoach Festival to perform the classic hits; Carrie later referred to it as "the greatest night of my life." She reiterated that sentiment in a series of Instagram posts from her night in London with one of her favorite bands.

"Together again.but this time in London and with a few more friends! Thanks, @gunsnroses and your crew for welcoming me into your world like family," she praised alongside a photo of her and Axl Rose on stage. "I am but a fan who somehow managed to find her way on stage to have a moment of magic with her heroes! How did I get so lucky?"

She shared another snap of her and the entire Guns N' Roses band standing with their arms wrapped around each other while taking a final bow.

"Never in a million years did I think I would get to spend not one but TWO nights of my life on stage with @gunsnroses ! Thanks, again, to the band and crew and, of course, to the fantastic crowd!" Carrie captions the picture of her beaming alongside her idols, noting that the crowd's energy was electric. "Until next time."