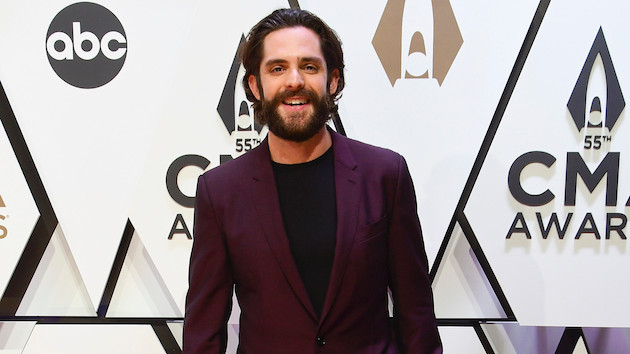 Thomas Rhett is fleshing out more details on Where We Started, his next album and the project that's tied to his current single, "Slow Down Summer."

After previously saying only that it'll be out in spring 2022, Thomas now has an exact release date for fans: Where We Started will arrive April 1.

He also shared the cover art on social media, revealing a close-up shot of his face in sepia tones. The album's title is written on the top right corner in bold, orange print.

Eager fans can look out for something special in mere hours, since Thomas also said he's planning to drop not one but two songs off Where We Started on Friday at midnight. It's still not clear what those songs might be, although TR has been sharing plenty of unreleased music on his socials over the past several months. It's certainly possible that fans have already heard acoustic snippets of some of the songs on Where We Started.

The upcoming project is sandwiched between Country Again Side A and Side B. Thomas dropped Side A last year, and he's planning to put out Side B in the fall.

When he first announced that Where We Started was coming out in addition to Side B, the singer told fans his wealth of new music was due to writing "so many songs" during the COVID-19 pandemic and first year back on the road.

"What we have decided to do is put out two albums next year," he said at the time.