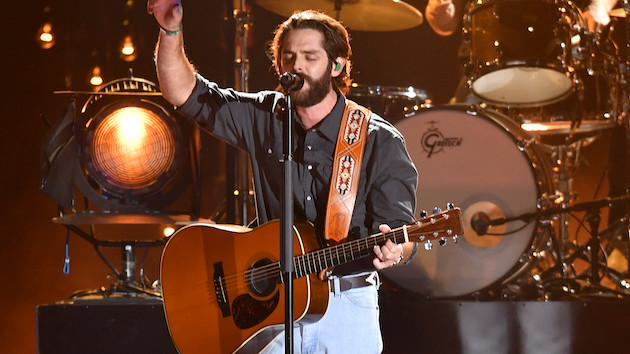 Thomas Rhett's "Country Again" started out as a simple acoustic demo -- and now it's earned him his fifth Grammy Awards nomination.

The Recording Academy shared its 2022 nominees on Tuesday, and among them was Thomas, who's up for Best Country Song thanks to "Country Again." To celebrate the milestone, Thomas shared an early version of the tune, recorded right after it was written.

"Here's the first worktape of Country Again.' Me, Ashley Gorley and Zach Crowell wrote this song over Zoom in the dead center of 2020," Thomas remembers. "This title has been in my phone since May of 2019. This week it was nominated for a [Grammy.] So grateful and blown away."

The Grammy for Best Country Song is awarded to songwriters, making the work tape -- and its connection to Thomas' co-writers -- even more special.

If Thomas wins at the 2022 ceremony, it'll be his first-ever Grammy. He's not short on trophies from awards shows in general, though: Most recently, at the 2021 ACMs, he won Male Artist of the Year.