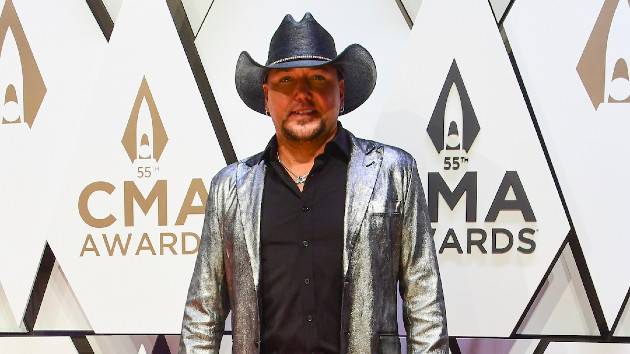 Jason Aldean admits that he never thought he'd be raising young children at 40 years old -- but now that he is, he wouldn't change a thing.

In the latest edition of People magazine, the singer reflects on the differences he's found between parenting young kids in his 20s, versus parenting young kids nowadays at age 44. Jason has two teenage daughters from his previous marriage to Jessica Ussery, and he says that back when his daughters were little, things were a "helluva lot different," especially when it came to balancing family life with his career.

At the time, the singer was chasing success and touring as many as 250 days a year. That means "you're going to miss a lot of things" at home, he admits.

Now, Jason finds himself a dad to young kids once again: He and his wife Brittany share three-year-old Memphis and two-year-old Navy.

"At this point in my career, I've been able to be home a lot more for the little ones and experience a lot more of those things," he reflects. "I'm not out there going after the unknown."

With massive career success under his belt, Jason feels content to spend more time off the road and at home watching his kids grow up.

"It feels good to know that for the last 16 years, I've had a chance to do a job that I truly love to do," he goes on to say, adding, "but if it all went away tomorrow, I'd be like, My kids are good.' I got no regrets at all."

Jason's 10th studio album, Macon, came out earlier this month. It's one half of a double album, the other half of which -- titled Georgia -- is due out next spring.