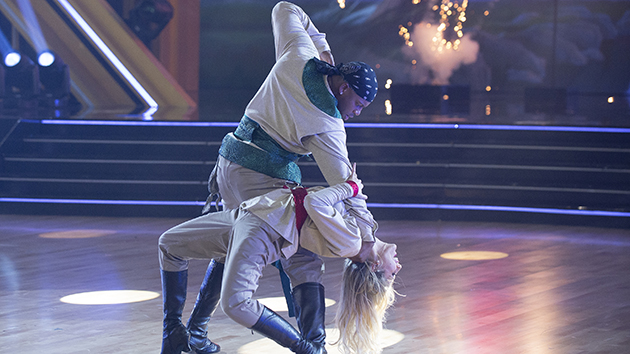 Jimmie Allen brought a touch of sentimentality to his Disney-themed Dancing with the Stars performance Monday night by dedicating it to his late father.

The singer, who's a hardcore Disney fan, and his partner Emma Slater performed the paso doble to "I'll Make a Man Out of You" from Mulan, scoring 30/40. But the theme of Disney Heroes was particularly poignant for Jimmie, as he performed the number in honor of his late father, James E. Allen, who passed away from kidney failure in 2019.

"When I think of heroes, I think of my father," he said during rehearsals. "He's the one that raised me on never make an excuse' and that's helped me so much with my career."

"HERO's Night on Disney Week here at @dancingabc My partner @theemmaslater choreographed this beautiful dance that I dedicated to my father. Miss you every single day dad," he shared on Instagram after the show.

The family has been longtime Disney fans, with Jimmie proposing to his now-wife Alexis Gale at Disney World in 2019.

The Disney theme continues tonight when Dancing with the Stars airs on ABC at 8 p.m. ET.

Disney is the parent company of ABC News.