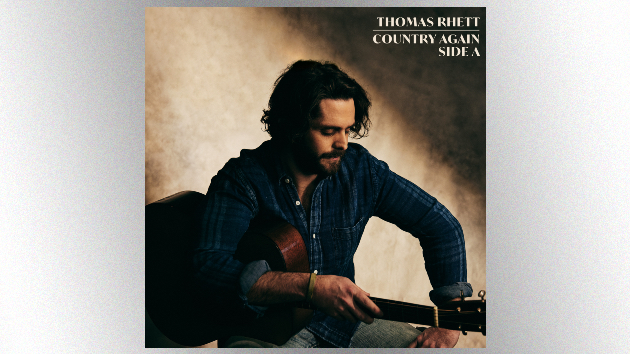 This week, Thomas Rhett claims his 18th #1, as "Country Again" tops the chart. While his last dozen singles have made it to #1, that wasn't always the case.

"Minus the sunglasses, I wanted to be Eric Church," he admits. "I used Eric's producer. I tried to sing like him... My first two singles... did not do anything at all. My first two number ones... were songs that my dad wrote..."

"I put this song out called 'Make Me Wanna,' which was very strange to the radio at that point in time," he continues. "It was like seventies-disco-meets-country-lyric. I was like, 'Should I put this song out?' My manager Virginia said, 'If you're okay with this song dying at number 40, then that should be your gut feeling and you should go with it.'"

That, it turns out, made the difference.

"It sat at 40 for like 20 weeks," TR recalls, "and then all of the sudden, it started to catch. And then it became a hit, and that gave me the confidence to put a song out like 'Crash and Burn.'"

"And then [it] kind of changed this whole trajectory for me," he reflects. "I was in this lane, and then all of the sudden, I kind of veered left. And it kind of just gave me this confidence to put out songs that may or may not have worked."

"I followed my gut on a lot of the releases," he declares. "And I hope that... made a way for a lot of other artists to be able to put some of these songs out... as well, because people like Eric Church and Brantley Gilbert and Jason Aldean did that for me."