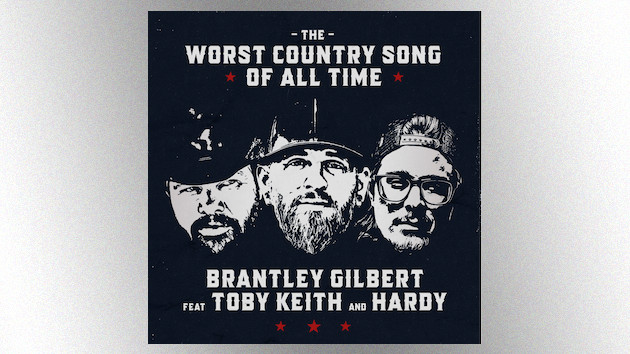 With multiple number-one hits and legions of fans between them, Brantley Gilbert, Toby Keith and Hardy know a little something about making great country music. But this time around, they're going for something different: Their new collaboration is called "The Worst Country Song of All Time."

It all started during a writing session with Brantley and Hardy, as well as fellow songwriters Will Weatherly and Hunter Phelps.

"Hardy threw the idea on the table, and he said, Guys, I know this is crazy, but I had a title I put down in my phone: The Worst Country Song of All Time.' We all laughed it off because obviously it was a joke," Brantley remembers. "Then we all were throwing out lines we thought were funny. The next thing you know, we've got this song written, and the rest is history in the making."

The end result? A tongue-in-cheek tune with lyrics that rattle off all the things that make for a bad country song: Minivans, traffic jams, blue John Deeres, caviar and much more.

For Brantley, the cherry on top was getting Toby to lend his voice to the song. "Toby has written some of the best and put out some of my favorite country songs of all time. So having him on it is kind of like that final seal of approval," he says.