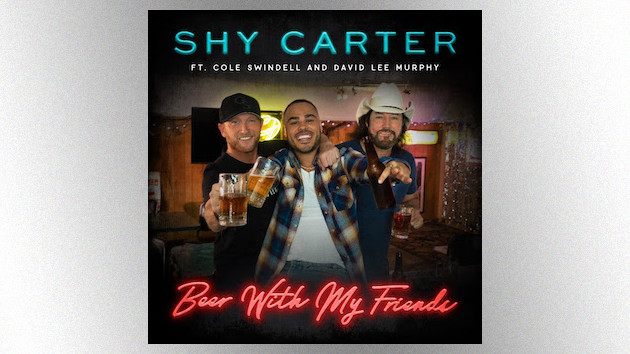 Shy Carter returns this week with his new summer swing-a-long anthem, "Beer with My Friends," a collaboration that features two of Shy's real-life country music pals.

Singing along with him on the track is 90s hitmaker David Lee Murphy, who also co-wrote the song, as well as Cole Swindell.

"It was a dream come true to collaborate with two of my favorite party-starters...I'm a huge fan of them both, and I'm so honored that they would sing this crazy, energetic, amazing song with me," Shy says of putting the song together. "My hope is that Beer With My Friends' becomes the go-to anthem for all the beautiful people out there who want to have a blast enjoying life with their friends and families!" he adds.

"Beer with My Friends" is the hard-partying next chapter in Shy's story as a solo artist, which began last summer when he dropped his major-label debut, "Good Love."

Even though he's still a relative newcomer as a performer, Shy's far from green in the country music business. He's a hit songwriter and producer who has worked with the likes of Billy Currington, Keith Urban and Sugarland. Fans also got a taste of his onstage presence when he duetted with Tim McGraw for Tim's 2019 song, "Way Down."

That's just the beginning for Shy, who's planning to tour with Tyler Rich this fall as well as hitting the summer festival circuit.