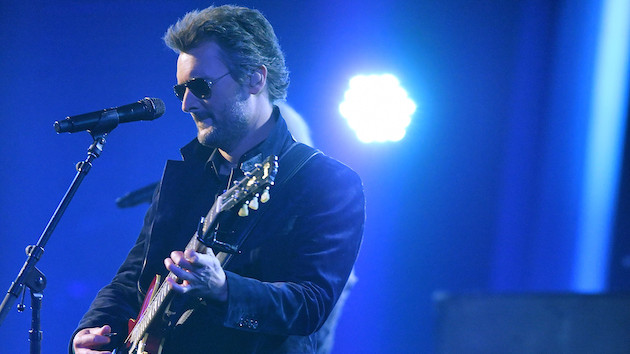 For the second week running, Eric Church is the top musical act in the county.

Thanks to the momentum behind his recently-released triple project, Heart & Soul, Eric is spending another week at the top of the all-genre Billboard Artist 100 chart. Last week, Eric celebrated topping that chart, which launched in 2014, for the first time ever.

The Artist 100 chart measures a number of different metrics, including album sales, streaming consumption, fan interaction on social media and more. Eric's also edging ever-closer to his next chart-topping radio hit: "Hell of a View," off his Soul album, is in the number-two spot on the Billboard Hot Country Songs chart dated May 7.

Billboard reports that Eric is the second country artist ever to spend back-to-back weeks on top of the Artist 100 chart, following Morgan Wallen's five-week reign in January and February.

Like Eric, Morgan rose to the top of that chart on the heels of a wildly successful, super-sized project: January's Dangerous: The Double Album. In fact, that project included a song co-written by Eric, who Morgan has always counted as a musical hero for him.

Morgan's reign atop the Billboard charts was record-breaking, even as his career took a nosedive in other respects. Just weeks after releasing Dangerous, video footage surfaced of the singer using the n-word. The ensuing scandal saw him swiftly ousted from many of country music's major outlets, including awards show eligibility and radio airplay.

Eric has spoken out against Morgan's conduct, calling it "indefensible" and saying he was "heartbroken when it happened," per Billboard. But he has empathy for the younger star, too: After the scandal broke, he sent Morgan a note telling him to keep "hanging in there."