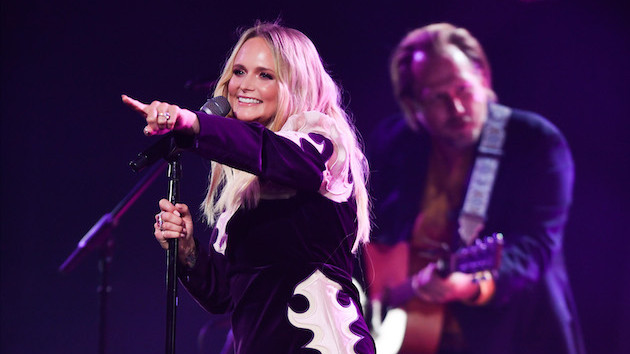 Miranda Lambert and Elle King opened the show during Sunday night's ACM Awards ceremony with their high-energy duet, "Drunk (And I Don't Wanna Go Home.)" Now the country-rocker pair are reaping the benefits.

Billboard reports that Miranda and Elle's song saw the biggest boost in sales gains of all the songs performed on the show, jumping 267% on Sunday with a total of 3,000 units sold.

Initial reports by MRC Data show a 317% sales gain for songs performed on the show overall. Other big boosts went to Gabby Barrett's "The Good Ones," Little Big Town's "Wine, Beer, Whiskey," and Ryan Hurd and Maren Morris' "Chasing After You."

"Drunk (And I Don't Wanna Go Home)" was one of three performances Miranda gave during the ACMs. She also took the stage with musical partners Jack Ingram and Jon Randall to perform their new song, "In His Arms," and she stepped in at the last minute for Chris Stapleton's wife and duet partner, Morgane, providing backing vocals for "Maggie's Song."