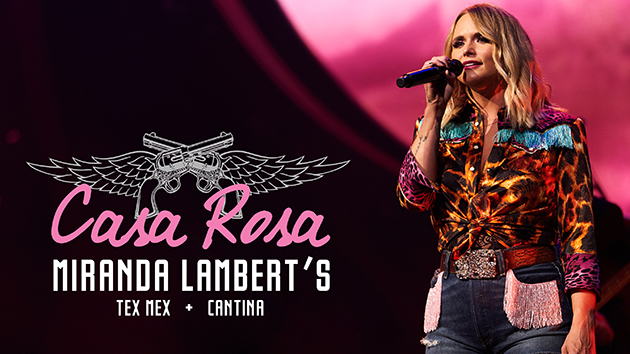 Becky FlukeFollowing the announcement last week that she's the first female country singer to open a bar and restaurant on Broadway in downtown Nashville, Miranda Lambert is sharing more details about Casa Rosa.

The Texas-inspired eatery doubles as a four-floor venue, three of which will feature live entertainment, along with a rooftop bar, slated to open in summer 2021.

The complex will be decked out with memorabilia from Miranda's illustrious career, including costumes from her videos and the birdcage featured in the video for her latest #1 hit, "Bluebird."

True to its name, the "Pink House" boasts tufted pink booths, along with a rhinestone saddle modeled after one of the singer's favorites that hangs inside Billy Bob's Texas, and an Instagram-worthy yellow rose wall.

The menu will feature Tex-Mex items such as tacos and one of Miranda's favorite libations, tequila.

“I’m so excited to have a honky tonk with my name on it! Casa Rosa will be a little taste of Texas in Tennessee," she says. "This place is special to me and I’m happy to be representing  the ladies here in Music City! See y’all down there!”

Additionally, Miranda is releasing The Marfa Tapes on May 7, an album with singer-songwriters Jack Ingram and Jon Randall.